PLEX Reverse sale and the winds of change

We start today with the PLEX price over the last one year. People made a lot of money riding this gravy train. Toot toot. 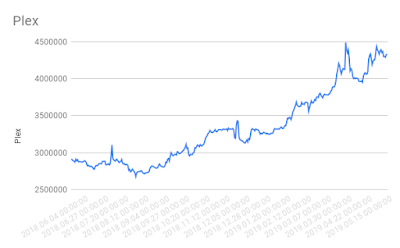 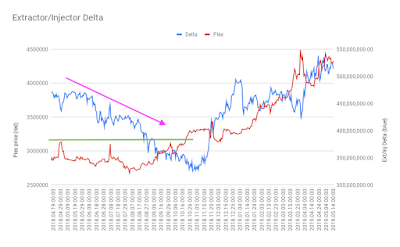 I showed the downward pressure CCP sales were having on the PLEX price. I have no idea if they were trying to keep that price resistance (green line) ~3.2m ISK per PLEX price. Some comments have been made that they wanted to increase revenues and volume of cash purchases in order "pimp" their books. By have more money running through the register for the sale to Pearl Abyss. Again possible but I have no idea. What I do have a strong conviction about is the sales depressed the price of PLEX for 6-12 months. Like holding a ball underwater once you release the downward pressure it reaches for the sky. 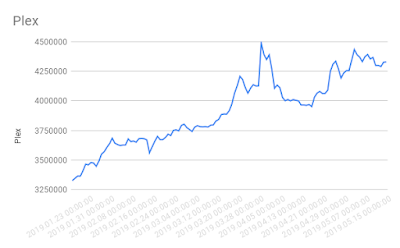 Let's look a little shorter time frame on the chart below is the last 120 days. Can you see the big spike? That was a sale of a different kind. CCP changed tack. Instead of using a direct purchase dollar /sterling/euro sale. The sale was ingame. The Omega gametime price was changed. Normal price 500 PLEX for a super duper special price of 425 PLEX. 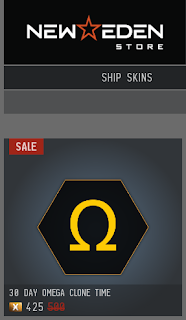 Now instead of artificially creating a resistance to price. By people swapping real currency for PLEX and then dumping the PLEX on the market. They created a higher demand for PLEX forcing the price up. The time period, I think, was a week possibly shorter over a weekend? So we see a spike higher in price to satisfy the demand. Then a sharp decline as demand returned to normal. Over the next 2-3 week period price corrected down to below 4m ISK. Then what? BTFD (Buy The Farking Dip). A lot of people made a lot of ISK from SP farming. Actually my post on inflation showed people made a lot of ISK from everything. The dip in price allowed a lower entry point for speculators to buy PLEX knowing that in four weeks everyone needs to PLEX again. 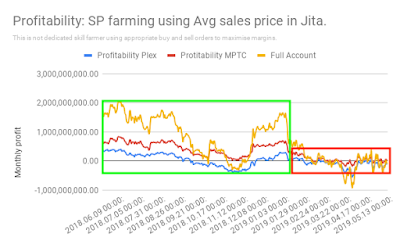 This was a previous chart showing profitability of SP farming. Whether a full account farm or farming two alts to PLEX a main character on one account. Monies were flying around like a rap video shoot in the green box. In the red box? Yeah not so much.

The gravy train on extracting has gone "for now". So "where da money at?". The markets for the raw materials and the outputs.  It will be interesting to see over the coming months but CCP could have set a clock in motion. Speculators now have a window when they know accounts need to be plexed. They already have a good idea anyway because they own all the stations in Perimeter where almost all the PLEX etc is bought and sold.

Posted by Thousandaire at 11:50